How to Overcome the Chinese Stare: PETTINESS ALERT

The most difficult thing for me to get accustomed to is, by far, the stare of the Chinese. I read about it. Heard it mentioned in stories of travelers I know, but nothing and I mean absolutely nothing, prepared me for what I have deemed the Chinese stare. Don’t get me wrong, there are several places where people have extended their glance in my direction: India, Guatemala, Italy and Colombia are the first places that come to mind. Admittedly, the locals in each place stared for different reasons, but I never felt offended or uncomfortable. The Chinese however, my oh my do they take staring to a completely different level. I’ve had people trip, bump into one another, ride their bikes into trees, fail to yield in their cars and, of course, take my picture without my permission while eating, walking, shopping, handling business in the bank or engrossed in conversation. And it’s not even that they look you in your face. They look you up and down. Some people frown and furrow their brows while others stare with a look of surprise. And then there are those that giggle, point and whisper. I swear I wish I knew enough Chinese expletives for the latter. In my attempt to be as culturally sensitive as possible I asked my Chinese colleagues, “Yo! What’s up with the staring?” A question to which I’ve received basically the same answer – “They know it’s wrong, but they do it anyway. They don’t know it makes you uncomfortable.” …..Oh really now? They don’t know? Well, I’ve received quite a bit of advice on how best to deal with this intrusive, uncomfortable and dare I say, rude business of staring, but I’ve devised my own three ways of dealing with this madness. Yes, some may think it’s petty, but I can’t say that I’m torn up about that. *shrugs* 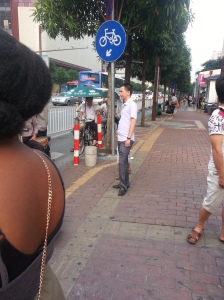 This man turned his head as soon as I pulled out my camera to take a picture. Lol!

I know that I am a stranger in their land. It’s very difficult to forget this, especially here. And I’m not even attempting to impose my way of thinking on an entire culture. But I will continue to remind them, ever so subtly, that we are humans and not here on display just for them. I see myself updating this list as the year progresses. Ciao!

3 comments on “How to Overcome the Chinese Stare: PETTINESS ALERT”