To Bangkok with Love Part 2- A Happy Surprise

I remember asking some people how much time one should plan to spend in Bangkok and being told two days max. Admittedly, my perspective of Bangkok was a bit skewed due in part to the stories and feedback of others’ and largely the Hangover movie. I had a picture in my mind of a place with tons of garbage and grunge and lady boys and lots of sex for sale wherever you turned. I got the impression that absolutely anything goes and that two days was more than I could take in a place that offered up cheap booty and anal invasions even to those who weren’t the least bit interested. Needless to say, I was wrong and hella glad of it. 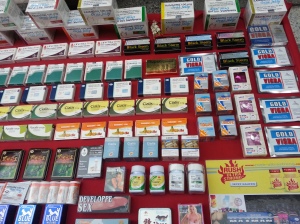 Yes, there is cheap booty for sale, but it’s not as obvious as one would believe. These “women” of the night (they’re not all women) are actually very discreet, because, and here’s the shocker, prostitution is not legal there. *gasp* And yes, sex tourism is a huge market there and THAT is quite obvious. However, for a society that has been portrayed as anything goes, it is actually quite conservative. Although there is no official religion of the country, Buddhism is the vein spirituality practiced by most, followed by Islam and then a very small number practice Christianity. It’s quite a shame that so much focus is placed on the salaciousness of Bangkok and not the beautiful and ornate Buddhist temples erected throughout the city.

Despite what I was told, Bangkok offered more to do than just shop and eat for those of us not interested in the “other” activities. Hell, just our trip to Khao San Road was an adventure that took an entire day. Of course, I could have paid for a taxi and it would have taken less time, but where’s the fun in that? So we hopped on the BTS with our freshly purchased day passes and trekked by train and then express boat to the road unofficially known as a backpacker’s haven. And it’s a good thing we did because once you get off the boat you walk through a passage way lined with vendors of beautiful, yet cheap, Thai artifacts and souvenirs. Here and only here did we purchase all of the things we wanted to take home with us. There was so much to choose from. My daughter’s love for everything elephant was sufficiently satisfied with a backpack, figurine and a few other doodads. And I picked up a few pieces to add to my artwork collection from around the world. Pretty soon my home in the U.S. will look like Cost Plus World Market without the price tag. Ha! Once on Khao San we enjoyed traditional Thai fare at a place whose name I can’t remember ( I really need to start writing this stuff down). I had a dish called Khao Soi and oh my heavens! It was absolutely delish! It was egg noodles in a rich, coconut curry soup and a fried chicken drumstick floating in the center. Superb! (unfortunately, by the time I thought about taking a picture, my bowl was pretty much empty. Oops!)

There are tons of shops and vendors to choose from in the area of Khao San Road. You can literally find anything you want or need and even some stuff you’d rather not ever see again. But it is overrun with tourists and backpackers. Now for us, this was actually welcome. After living in China for two months in an area where foreigners are rare, we actually enjoyed not feeling like mythical unicorns. Nonetheless, in the end, we decided that the adventurous trek over, the passageway of vendors and the food were the highlights of Khao San Road. Unless you’re getting a massage or drinking, there wasn’t much else to do.

There are three more things I want to discuss, but I will put those things in yet another post. Who knew I would have so much to say about Bangkok? My next post will be about the elephant park, a floating market, massages and Cabbages and Condoms.